I have never been a huge fan of contracts. I firmly believe that a contract is only as good as the person signing it and almost always favors the party with the most power. I prefer relying on a project scope document to define the project or service, and a simple email explaining the payment options. I know that it flies contrary to the advice most people give or have given, but the only time I have had issues with a client is when they insist on a multi-page document that they provide.

Let’s take a look at a few of my least favorite clauses seen in a standard contract. 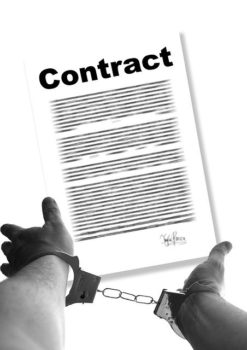 In its most basic form, a non-disclosure agreement is simply a promise to not disclose anything that you learn to a third during the term of the contract. This seems like a simple thing to do and expect. But we all have that friend or business associate that loves to share “secrets” about projects they are working on or clients that they are working with. These are the people that a non-disclosure agreement is designed to protect a business from.

But when should you avoid signing a non-disclosure agreement?

The vast majority of non-disclosure agreements I’ve run into are put forward by people shopping ideas, using a boilerplate NDA. The worst of these are from people that ‘have a great idea’, but before they can tell you anything about it at all, they want you to sign an NDA and even a Non-Compete before they’ll tell you what that idea is. Do not sign these, ever. I’ve found that most of them are basic ideas, or scams wrapped up as a new idea, and the NDA is a way to keep you from warning anyone else away from the project.

If you are going to be working for a client or employer and they want an NDA to protect their trade secrets, sure, sign that one.

Non-Competes are an entirely different animal. Generally, a Non-Compete is designed to keep you from working for a competitor, or starting a new business, that competes with your current client or employer. A few decades ago these were very common, and even now they are still far more common than they should be. In fact, some locations have started making non-compete clauses illegal in a contract.

Here is the biggest issue with a non-compete, it keeps you from working in the field you are likely best at. A company should not be able to keep you from earning a living, and this why so many of them are overturned when challenged in court. The key is that a contract must be equitable to both parties to be valid. To tell you that you cannot work in your field at the end of your employment without compensating you in some way makes that agreement invalid.

Who Owns Your Work?

When signing an employment contract you need to read it very carefully. A clause that is slid into many “standard” contracts is that the employer owns any work that you create while you are employed by them. Even work that you do on your own time, at home. Personally, I would never sign a contract with this clause in it for obvious reasons. Even if the employer tries to reassure you that they have ‘never‘ enforced that clause or they would ‘never‘ hold you hostage over any work done at home.

If they have never enforced it or never intend to enforce it, then they should have no problem removing that clause from your contract.

The reverse of this can be an issue as well. When you hire a contractor, maybe a graphic designer, they legally hold the copyright to their work, as they should. But you should get an agreement from them that assigns the exclusive copyright to you. Most graphic designers will not have a problem with this, and even fewer would try to reuse the work they did for you with someone else, but why take the risk when the upfront solution is simple.

This is the hidden clause that gets most people transitioning from consulting work to full-time employment work. At-will employment simply means that you can be fired / terminated / released into clear blue sky at any time for any reason with no recourse on your part. This clause is ALWAYSÂ buried somewhere, usually in an addendum. Even if you have a 12-month contract, for $10,000 per month, that little clause can be used to release them from the contract any time they see fit. I’ve lost count of the number of times I’ve seen someone flat out screwed this way.

At-will clauses effectively make the entire contract worthless to you while making it a club that the employer can swing at you at any time.

Are there reasons to have a contract? Certainly. Do I trust anyone that has one handy to give to me to sign? Nope. If you are signing a contract, read it. Understand it. And look for the clauses that put you at a disadvantage. Be prepared to either accept that you are at a disadvantage, or be willing to walk if you don’t like what you see. Until more people start doing this, contracts will continue to be used as tools to take advantage of you.

In my opinion, of course 😉

This site uses Akismet to reduce spam. Learn how your comment data is processed.

The best way to be sure you don't miss any of our shows is to subscribe to our monthly newsletter. Besides, we'll be including some extra goodies that you won't get any other way!

This website uses cookies to improve your experience while you navigate through the website. Out of these cookies, the cookies that are categorized as necessary are stored on your browser as they are essential for the working of basic functionalities of the website. We also use third-party cookies that help us analyze and understand how you use this website. These cookies will be stored in your browser only with your consent. You also have the option to opt-out of these cookies. But opting out of some of these cookies may have an effect on your browsing experience.
Necessary Always Enabled
Necessary cookies are absolutely essential for the website to function properly. This category only includes cookies that ensures basic functionalities and security features of the website. These cookies do not store any personal information.
Non-necessary
Any cookies that may not be particularly necessary for the website to function and is used specifically to collect user personal data via analytics, ads, other embedded contents are termed as non-necessary cookies. It is mandatory to procure user consent prior to running these cookies on your website.
SAVE & ACCEPT